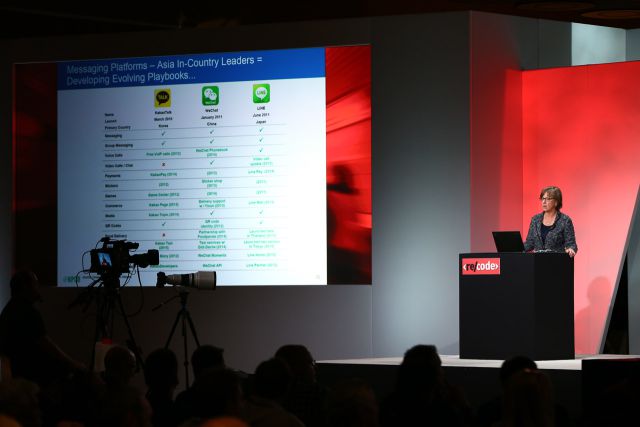 Two decades after 1995, the year of the Netscape IPO, the Internet population has exploded in size, it’s much more mobile, and it’s increasingly driven by user-created content and flexible content delivery that’s controlled by users. But growth is slowing in all but a few key areas.

While some of these points seem obvious, Mary Meeker’s charts, graphs and data helps quantify the landscape.

The tech industry makes a yearly tradition of turning to the fast-talking and data-synthesizing Meeker, a former Wall Street analyst turned late-stage venture capitalist at Kleiner Perkins Caufield & Byers who publishes an influential annual assessment of the Internet economy. As has been her custom in recent years, Meeker introduced her Internet Trends report at the Code Conference in Rancho Palos Verdes on Wednesday.

That’s 73 percent of the population versus 1 percent. 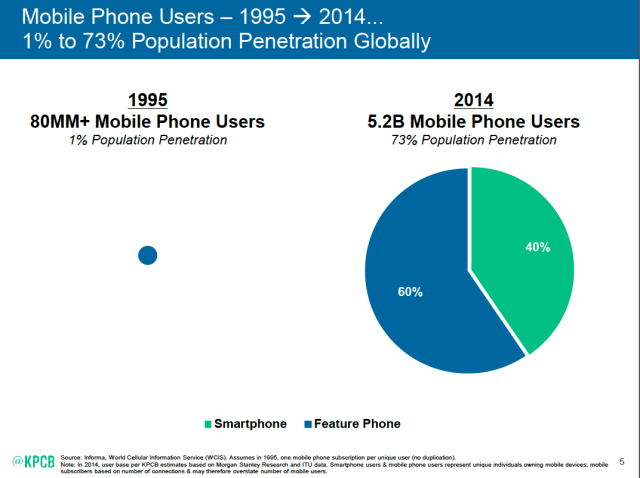 Continuing barriers to accelerating growth include things like phases in adoption cycles and dependence on developing markets with low spending power and infrastructure, Meeker said.

But Meeker pointed out a few accelerating bright spots — video, for instance. Video accounted for 64 percent of consumer Internet traffic in 2014 (versus 62 percent in 2013) and 55 percent of mobile traffic (versus 52 percent in 2013). Facebook now gets four billion video views per day, up four times in six months; while Twitch has 100 million monthly active users for its live streaming, up 122 percent this year.

And mobile video is an ever-growing portion of video viewing, and it’s emerging as a different, vertical video medium, because of the way people hold their phones.

What’s the next growth spurt after video? “Buy buttons” would be Meeker’s bet. That is, mobile commerce that allows people to purchase from wherever they happen to spend their time — Twitter, Facebook, Google. Mobile usage evolved rapidly, she said, from text to images to videos. Buy buttons are likely to appear just as seamlessly.